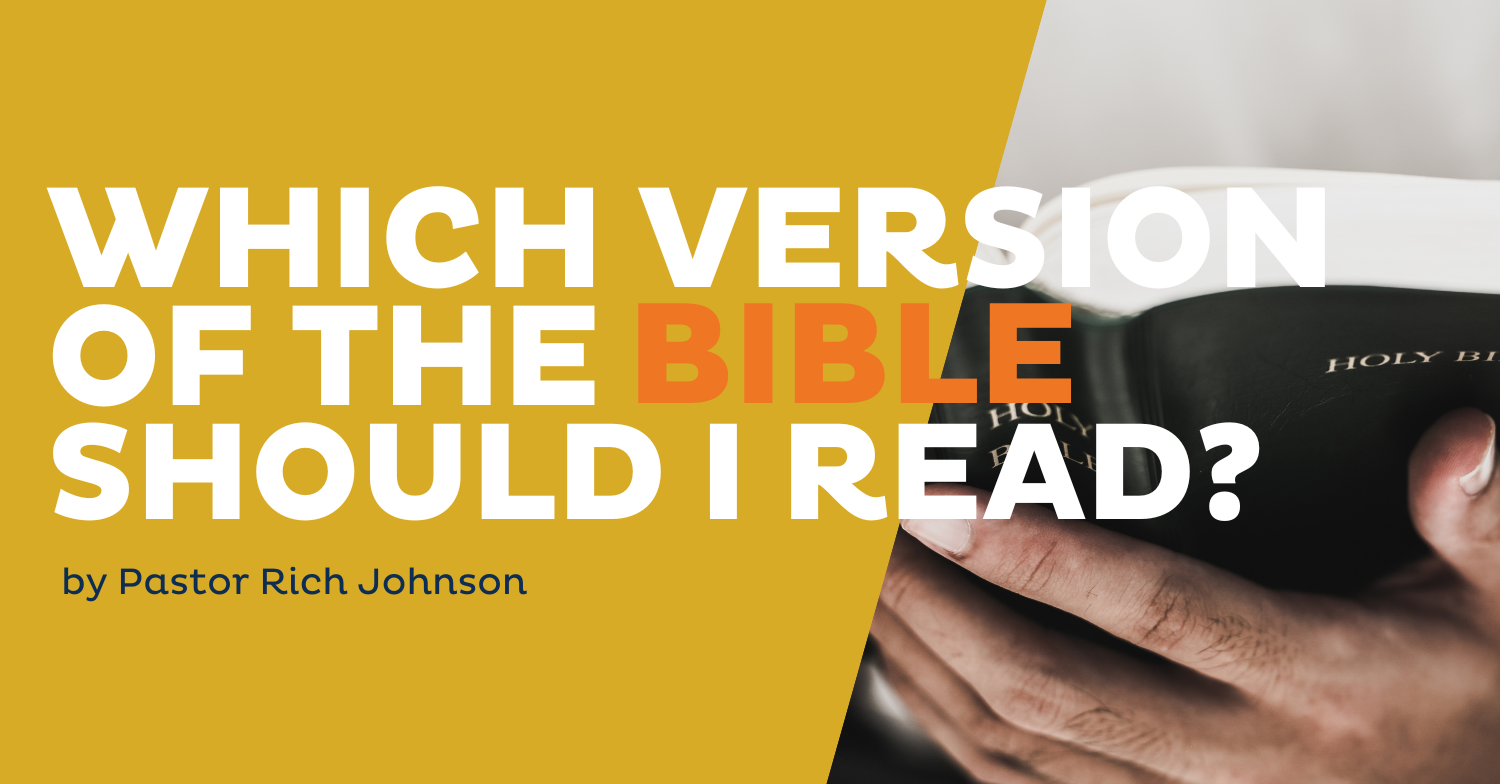 I recently got an email from someone who was considering a switch from their current bible translation to another.  Picking the “right” translation can seem like a stressful task for someone who has been committed to one version for any length of time. If that commitment is tied to a belief that one version is better than another, then the stress increases.  And if that person was taught their version was tied to their salvation, ie “getting it right”, then you might as well multiply that stress by a thousand.

Thankfully, choosing which version of the bible will not guarantee your salvation.  Jesus' death on the cross and his resurrection over death is more than sufficient for our eternal rest.

Still, the search for the “perfect” translation by scanning Amazon, the local bookstore or even your church can be overwhelming because the options are endless.

Here’s a little test: Ask five of your friends which version of the bible they read most often. They may respond with some very strong and clear convictions about which ones are more reliable, more relatable, or more relevant.

In a world filled with many versions and translations of the bible, how do we pick the right one?

How about we just pause for a moment and acknowledge the privilege in that last question.  If you simply have the choice of which version to read, study or use on a daily basis, then you are lightyears ahead of 90% of the world.  The fact that you are literate is already a privilege...and then you want to talk about which of the 100+ versions of the English bible to choose from!

Yeah...we’ve got freedom to choose...so let’s begin this exploration with the humility it requires.

Why so Many Versions?

There is no shortage of reasons why there are so many translations to begin with, but suffice it to say that reliability, relatability and relevance are the primary factors that lead translators to print newer versions of an ancient text. The bible, all 66 individual books, were written in ancient Hebrew, Aramaic, or Greek. The first translations were made into Latin, followed by German, which opened up the world to indegenous translations of the ancient text.

Have you ever struggled with the question “If everything in the bible is true, then why are there so many different versions?”

In full disclosure, I know I have wrestled with that question.  We often hear that The Word of God, aka the Bible, is infallible and inerrant (correct, trustworthy, certain). Yet, the bible was written by humans and translated into multiple versions by humans...so how can it be infallible?

My personal belief is that The Word of God, written in its original languages is without error and sufficient for our understanding and application to love God and love one another as God has loved us.

But language changes over the centuries. While the language in England during the reign of King James I is poetic and captivating, it is not how most English speaking people comprehend, because it is not the way we speak or think.

Some translations of the bible attempt to focus on  a formal literal translation, ie. word-for-word, such as [N]KJV, NASB and ESV.  Other translations choose to focus on the meaning of the word or phrase. This later group takes into account the cultural and historical context of the message to help that context show through to a modern audience.  These translations can range from a thought-for-thought translation to a paraphrase of the bible.

Thought-for-Thought translations evaluate the series of words in the original text to comprise a consistent thought. These versions are easier to read, ie. NIV, CSB and NLT.

Paraphrase translations of the bible seek to make the scripture more understandable and take a liberal form to present the text in a way that inspires the reader. It’s a rewording to help the reader more easily interpret the shades of meaning they might otherwise miss in a standard translation. Examples include The Message and The Passion bibles.

So What Version do I Read?

I grew up on the New King James Version (1979-1983) and most of my scripture memory comes from this version. When I’m doing my devotional reading, it generally starts with NKJV, but it doesn’t end there. I have other versions handy, or electronically, that I use to compare, study and glean understanding.  Currently, my second go-to version to read from is the Christan Standard Bible. It’s in-between the KJV and NIV.

Oh, by the way, we haven’t even touched the topic of study bibles.  I’m AMP for primary study.

At Sanctuary Columbus, the church I pastor, most scripture reading comes from The New International Version because the language is more natural to the way we speak.  The scholarship of the TNIV is consistently reliable, drawing from original sources available at the time and it’s gender neutral.  It’s not a word-for-word translation, but it is highly accessible to a mass of people.  The criticism of the TNIV is the same one might give to any translation; soooooo many words in the original language have no equivalent today, and vice versa. Even if there are equivalent words, that doesn’t mean that the originators actually meant the same things that we would.

To be honest, I’ve been thinking about moving to using the CSB in corporate scripture reading and the primary version for preaching. The translation philosophy is a strong balance between word for word translation and readability in the modern English language and it was developed by a very diverse committee. I’m still undecided and I don’t believe there is a strong, compelling argument for not using the TNIV.

The One You Read

In talking about this with my wife, she said, “The best version of the bible is the one that speaks to you.”  I like that response.

It’s similar to another quote I’ve heard, "Which bible is the best? The one you will read."

Beloved, we should not get hung up on finding or choosing the perfect version of the bible, but let’s turn our attention to reading the one we have.  Picking your favorite bible will come down to what you feel comfortable with and aids your practice of memorization.

And if you need a quick reference of my personal, bible version preference … here ya go!

Grace and Peace on your selection,

The Why of Advent